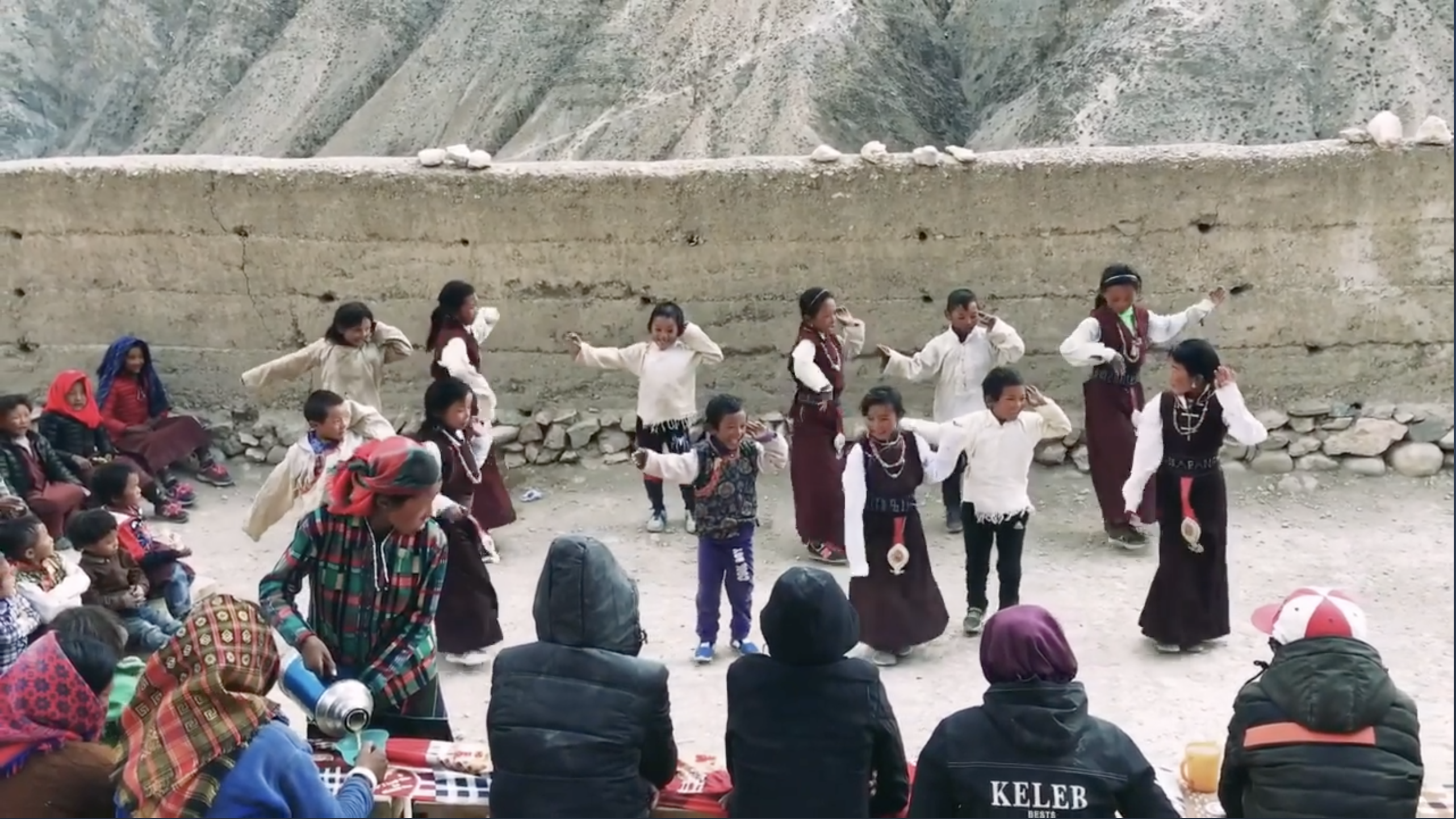 The kids, especially the girls, loved to dance. Phurba Miss has been teaching them their traditional/local dance but there was no one to teach them “Nepali Dance.” The definition of “Nepali Dance” was very simple to the kids, any dance performed under a song with Nepali words was a “Nepali Dance.” “Kham”, a Tibetan dialect, was their mother tongue and it wasn’t just a chance to learn dance moves but to learn new Nepali words/songs. This wasn’t limited to the dancers, all the students (28) knew the words to the song by heart (you can hear them singing in the video as well.)

This dance is probably my greatest achievement yet. The song was chosen because I had access to the music video and most of the dance steps are taken directly from the music video of the song “राजा मैना रानी” from the movie “नाइ नभन्नु ल ४.” You can easily see the resemblance if you watch the video on YouTube. As some parts in the original video don’t have dance steps, I had to dig deep into my creative side to figure out the dance steps that were not so hard for the kids and fitted nicely to the song. Thanks for the dances that I had seen in cultural programs and dance competitions in BNKS it wasn’t much hard to figure out the steps and teach the kids. People from BNKS can easily tell which steps I am talking about. School Coordinator for a nearby Karang Village’s School, Mr. Gojor Sir said that “I have seen many types of Nepali dances performed in this area and these steps (starts from 2:20) are something unique and completely new. It’s wonderful.”

Along with being a science teacher, I took up a challenge to teach the kids “Nepali Dance” and it wasn’t as easy as I thought. Dance was taught after classes and it wasn’t always pleasant. Sometimes the kids were indocile while sometimes I felt lazy. Some days I even thought about why I took this task and thought about canceling the dance because there was no progress. As the timing clashed with us going to play football, teaching and practicing dance was a boring thing. The dance was to be performed on the Report Card Distribution Day, and I thought I would not be able to complete the dance in time.

But to my surprise, one day, the kids told me the dance was complete, and I was completely shocked. Turns out it was actually complete. The first part and the last part of the song were the same, as a result, the dance steps were also the same. After that, only tiny details were to be taken care of, and practicing 1-2 times every day was enough.

This video was taken on Report Card Distribution Day, the last official School day. This day can be thought of as equivalent to “School Day.” Talking about this day, sadly “Ebi” (grandmother) Phurba Lhamo, the oldest person from the village, passed away on that day in the morning and because of that, we weren’t sure whether to proceed with the program or not as it involved loud noises, dancing, singing and drinking. As we had kids from three different villages, Nyisal, where the school is located, Luri, about 1 hour from the school, and Musi, about 3 hours from the school, the parents/villagers were already invited and the day after we were to leave for Kathmandu, it was a difficult decision to take. The seniors from Nyisal village conducted a meeting and decided to go forward with the program.

As romanticized, pretentious, and exaggerated as this may sound, watching the kids dance, I felt so happy and peaceful from inside that I was about to cry experiencing this performance with thoughts and glimpses of the teaching and practicing moments in my mind, you might figure this out, or not, from the tone of my voice in the video. Listening to the whole school singing the chorus of the song was as blissful as anything can ever be experienced. From almost forfeiting the dance to this was an adventure within an adventure. I think I did a great job. Even when I watch this video now, I feel very happy and rejoice in my time in the mysterious land and I think that is all that matters.